(btm) Cucumbers from neighbourhood garden patches and honey from roof gardens – visitors from all around the world are always amazed to see how green Berlin is, eats and lives. More than 30 percent of the city zone is in fact green areas or forests: 2,500 parks and gardens, 440,000 trees, and 180 kilometres of navigable waterways combine the feeling of a big city with relaxation like no other. Inner city oases have emerged 25 years after the fall of the Wall, some in hidden locations, others in unusual ones, which overrun the deserted, run-down areas of the once divided city in the courtyards, on roofs, and in old industrial monument buildings from East and West Berlin.

If you take a stroll along the River Spree from the Tiergarten to the Reichstag towards Hauptbahnhof through the government quarter, or wander around trendy districts Kreuzberg and Neukölln along the Landwehr Canal, you’ll notice that in Berlin, city life and nature go together everywhere – and belong together: historical landscape design by the greats such as Peter Joseph Lenné, Georg Wenzeslaus von Knobelsdorff and Karl-Friedrich Schinkel make for an appealing walk through the city with landscaping from different centuries.

The green centre of the German capital stretches along Straße des 17. Juni, between Brandenburg Gate and the Zoological Gardens in the West: the Berlin Tiergarten. In the 16th century, this area was used as hunting grounds for the Prince-Electors of Brandenburg. In 1742, King Friedrich II of Prussia commissioned architect Georg Wenzeslaus von Knobelsdorff with converting the hunting grounds to a recreational park for the public. Around 100 years later, the famous landscaper Peter Joseph Lenné turned the Tiergarten into a landscaped park based on the English models that existed up until the middle of the previous century.

Today, it is one of the most important and popular green areas in the city, where tourists and Berliners alike enjoy spending time. There is a beautiful view of the park and the city from the Victory Column, the Café am Neuen See and the Schleusenkrug on the Landwehr Canal provide culinary refreshments amongst the greenery, and hours can be spent on the romantic Löwenbrücke bridge between Straße des 17. Juni and Hofjägerallee.
Tempelhofer Freiheit: a sea of green

When Tempelhof airport was shut down in October 2008, there was now a 355 hectare area that has been used as a giant park since 2010 and does not only surpass the Tiergarten, it is also the second largest inner-city green area in all of Germany. Tempelhofer Freiheit is now a sports and game field for Berliners and tourists that looks like a sea of green: visitors can enjoy the sunset in a light breeze here while parents fly dragon kites with their children. On the former runways, children fly kites and run around along with the bike racers, skateboarders, and inline skaters. Barbequing is permitted here in marked areas. Smaller pioneer projects such as urban farming and mini-golf courses designed by artists make the former airport a landing site for creative Berliners. Tempelhofer Freiheit is a symbol of the Berlin way of life – and in the winter probably the only long-distance running stretch in the big city.

Oases in the neighbourhoods

In addition to its green spaces, every district in Berlin has idyllic oases for picnicking in fields, walking in nature, and playing sports in the fresh air. Volkspark Friedrichshain in Prenzlauer Berg is Berlin’s oldest communal park. The 78 and 48 metre high grassed bunker hill – called “Mont Klamott” by the locals – has a wonderful view of the city. In the summer, the field becomes an open air cinema and Volkspark Friedrichshain is one of the most popular places in the city.

In the trendy district of Kreuzberg, the beautiful Viktoriapark is situated on Berlin’s highest natural point, the Kreuzberg. On the northern slope of the Kreuzberg a waterfall flows down the hill from the peak to Kreuzbergstraße. The slopes of the Kreuzberg are great for talking a walk in summer and for tobogganing in winter. You can have an idyllic picnic with a beautiful view of the city from the lawn at 66 metres high.

In Humboldthain in the district of Wedding, there is also a vineyard similar to in Kreuzberg which has a harvest resulting in about 200 bottles of wine annually. Today, two former flak bunkers in the park are used as high-level climbing areas. The former Gefechtsturm is the third-biggest hibernation area in winter in Berlin for about 250 bats.
Industrial complexes converted into green spaces 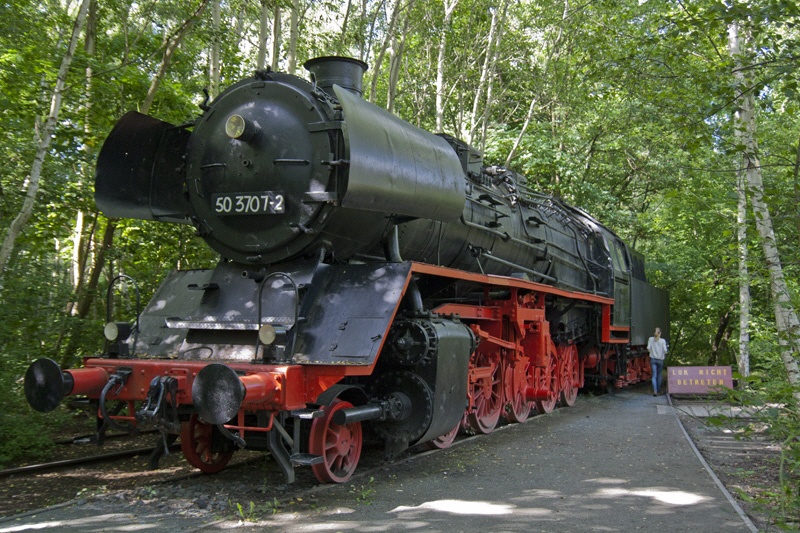 Where trains once ran are urban green areas today. The subway viaduct Gleisdreieck, built in 1903, connects the Tiergarten with the southern districts Schöneberg and Kreuzberg. With its extensive lawn areas surrounded by trees and diverse vegetation, the park at Gleisdreieck has been a popular recreational area since it was completed the previous year for business operators and visitors to Potsdamer Platz.

An exceptional, enchanted natural oasis emerged on the former Tempelhof railway yard. Today, 30 bird species, 57 spider species, 95 bee species, 15 grasshopper species as well as more than 350 plant species and 49 mushroom species have found their home in a jungle-like forest in southern Schöneberg. The 50 metre high water tower is the park’s landmark and attracts visitors and amateur photographers from all over the world with its relicts from the locomotive era and a 4,000 square metre locomotive hall.

The Villa Liebermann is one of Berlin’s outstanding private gardens. In 2006, the house and historical garden was opened as a museum by the Max Liebermann Society, and in its first year was visited by more than 100,000 people. The terrace with its paths and flower patches was especially inspiring for painters. In total there are more than 200 oil paintings that were painted in this large garden. On the basis of the Liebermann paintings, the design of the garden was then unveiled and redesigned true to the original. It is the combination of vegetables and shrubs typical of Liebermann’s garden design that especially fascinates visitors today. In 2008, the Liebermann Villa was awarded the monument conservation award.

The Fabrikanten Marlier garden stretches along expansive and topographically appealing grounds very close to the Liebermann Villa, which architect Paul Otto Baumgarten commissioned in 1914 with the construction of a represented villa. The garden, which surrounds the central residential building, is maintained in a reformed garden style that replaced the Lenné-Schule with its winding pathways at the beginning of the 20th century and is based on Baroque, Rococo, and Renaissance styles. The building, where the “Berlin Wannsee Conference” was held in 1942, in which the deportation of European Jews was decided, is now a memorial site. From 1991, the garden was elaborately restored and is accessible to the public.

Protected only by a fence, the Hartenecksche Villengarten attracts the attention of passers-by completely impartially. The grounds, with its low yew hedges, bright flower borders, multiple water games and inviting benches is one of the most beautiful villa gardens in Grunewald. The garden and house was built in 1911/12 according to plans by Adolf Wollenberg and was designed in the form of an antique Italian country house.
Historical greenery: the Berlin Lustgarten

If you follow the street Unter den Linden from Pariser Platz to Museum Island, you’ll find a garden there based on historical models: the Lustgarten in front of the Altes Museum. Based on the ideas of Karl Friedrich Schinkel, landscape gardener Peter Joseph designed the park in such a way that highlighted the effect of the surrounding buildings. Situated between the classical museum walls, the neo-Baroque Berlin Cathedral, and Schlossplatz with the future Humboldt-Forum, the Lustgarten became a popular place to relax in good weather. Tourists and Berliners enjoy the view of the Altes Musuem with its impressive sculptures and the powerful granite basin.

Walking along enchanting tracks – castles and their gardens

Cosy little tea houses, magnificent peacocks and well-situated walking tracks – the Prince-Elector of Brandenburg and the Prussian King both loved greenery. They surrounded their castles with unique garden and park scenery, designed by the most famous garden landscapers of their era. In several of the nine preserved Berlin castles, you can still admire these outstanding gardens.

One of the few Baroque gardens is situated in front of the magnificent Charlottenburg Castle from the 17th century. Walks through the 55 hectare castle grounds are a cultural-historic experience during all four seasons. Amongst other things, the imposing mausoleum of Queen Louise can be found here, as well as the former Belvedere tea house, where today exquisite porcelain can be admired. 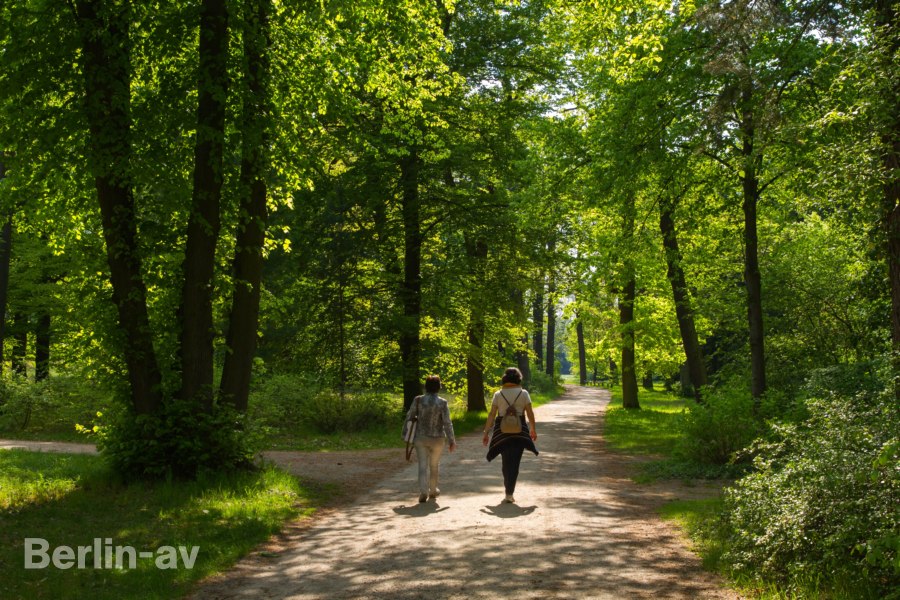 Pfaueninsel has scenic views and sights with its white, picturesque little castle from 1794. The UNESCO World Heritage site is only accessible via a ferry and thus has preserved its original character. From the castle with two towers, the view extends over the Havel to Glienicke, to the white ruins of a dairy farm and the waterfowl pond in the centre of the island. Lenné designed the garden landscaping with its extremely old oak woods, which also housed the earliest Prussian rose garden restored in 1989. The name of this little gem surrounded by water comes from the magnificent peacocks that can still be admired there today.

Lenné, Berlin’s most well-known landscape designer, created another impressive garden landscape close to Pfaueninsel for the Glienicke castle built in 1862. Based on English models, he divided Glienicke into flower gardens, recreational areas and parks and equipped it with a bypass path. At the same time, Schinkel created a casino and turned the former manor house into a small castle in the spirit of the classics. Thanks to the two designers, Glienicke grew into a perfectly formed unit of architecture and gardens.

You can experience culture and nature perfectly combined with a visit to the Köpenick Baroque castle. The three-story building is idyllically situated on Schlossinsel in southern Berlin, settled since prehistoric times. The English Schlosspark is surrounded on three sides by the Dahme. It invites visitors to have a wonderful walk about with its old, shady trees – including an elm tree more than 350 years old as well as black walnut trees and tulip trees, a ginkgo tree and a sequoia, and magnolias and many rhododendron bushes – and a small castle café.

The Jagdschloss is situated in Grunewald, in the about 3,000 hectare “green forest” in Berlin, the oldest still preserved Berlin castle. In 1542, Prince-Elector Joachim II, a hunting enthusiast, had the Jagdschloss Grunewald built on the banks of Lake Grunewald. The Renaissance building was expanded at the beginning of the 18th century by representative Baroque constructions. The forests and lakes around the picturesque castle “to the green forest” were traditionally used by the aristocracy as hunting grounds. Today, the forest region close to the city is used for walking, jogging, and relaxation.
Animal oases for relaxation.