(btm) „Fashion made in Berlin“ is setting international trends. Twice a year, Fashion Week draws international buyers, journalists and fashionistas from all over the world to trade fairs and a large number of fashion shows. A wide spectrum of collections are on view, representing several generations, from newcomers to established brands.

Many local labels such as Lala Berlin, Kaviar Gauche, Firma Berlin and Vladimir Karaleev are now for sale in Tokyo boutiques, show their collections in London and Paris and are even dressing the stars of Hollywood. Most of the successful young designers attended one of Berlin’s nine fashion schools. The annual shows of the graduating classes, especially the soon-to-be graduates of the University of the Arts and Esmod Berlin are much-acclaimed events that give new impetus to the industry every year. Many graduates remain after studying in Berlin. At least 800, mostly young designers make their home in the German capital.

Christened a ‚City of Design‘ by UNESCO, Berlin has become known as a place where a lot can be achieved with few resources. In comparison with other cities, Berlin still offers relatively affordable storefronts for use as studios. In addition, the city’s openness to diversity is an ideal breeding ground for innovation. Awards for young designers also help them launch their businesses. For example, the 2013 „Start your fashion business“ competition helped launch the labels Bobby Kolade, Sopopular and VonSchwanenflügelPupke. There are now about 3,700 fashion companies in Berlin, an increase of more than one third over the last ten years.

From Streetwear to Haute Couture 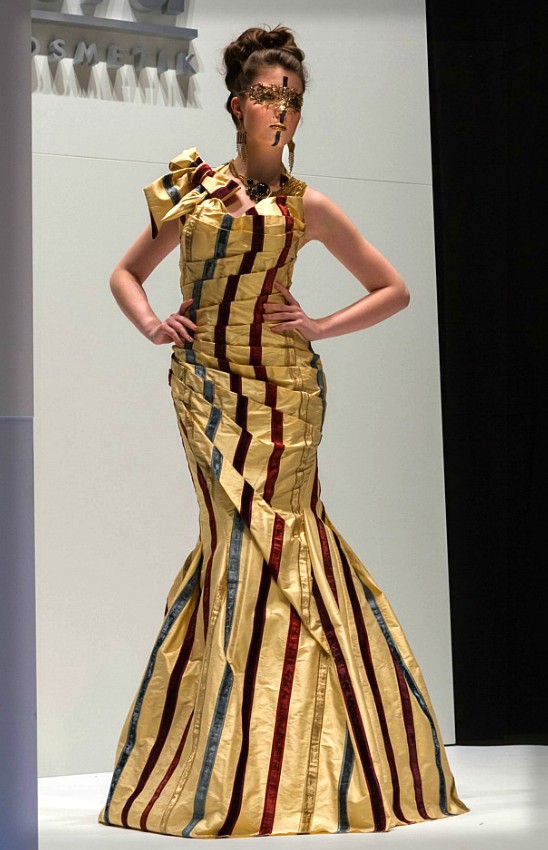 In addition to talented new graduates from the city’s fashion schools, young designers from all over the world are flocking to the metropolis on the Spree. Some eight hundred labels now make their home in Berlin. These labels include Michael Michalsky, one-time chief designer for Adidas, haute couture dress designers like Andrea Schelling or high-flying Michael Sontag, who became an overnight star with his asymmetric cuts and draping. Also from Berlin are labels such as Malaika Raiss and Achtland, who are inspired by the artworks created by the mentally ill at the Prinzhorn collection and paint, tear, sew and piece together silk. The designs of Perret Schaad and Alexandra Kiesel move between simple elegance and avant-garde. Newcomer label Glaw showed its women’s wear collection of leather and silk for the first time in Summer 2013 at the Mercedes Benz Fashion Week. The designs of young talent Hien Le are functionally minimalist, but are made of high-quality fabrics here in Berlin. Anntian has been on the scene since 2006 and is already internationally known for her trademark casual cuts with wild screen printing.

Eco-Fashion: from ReClothing to Upcycling

In comparison to other design cities like Paris or Milan, Berlin’s is always ready and willing to experiment; most recently, this has been seen in the area of eco-fashion. The newly founded label Umasan on Linienstraße in Mitte is the world’s first label offering only organic vegan goods under fair trade conditions. The operators forgo all animal products and are instead experimenting with innovative fibres. Magdalena Schaffrin is also at the vanguard of the new green movement. Shooting star Daniel Kroh has been all the rage for some years now. The Berlin designer creates fashion from old work clothes – „ReClothings“, as his recycling project is called.

Christine Mayer has her showroom in Berlin-Mitte. Her label represents the fusion of fashion, social commitment and the transformation of recycled materials. She’s had an absolute hit with her algae shirts, which are not only great casual looks but also nurture the skin.

Also at home in Mitte is the Upcycling Fashion Store, which displays wares by international designers who reuse previously worn clothing and materials to create new products. An example is schmidttakahashi label with studios on the Paul-Linke-Ufer in Kreuzberg.

Young fashion designers often sell their collections at flea markets in places such as the Mauerpark in Prenzlauer Berg, the Nowkoelln Flowmarkt in Neukölln or on Boxhagener Platz in Friedrichshain. A popular meeting place for young talent and fashion enthusiasts are also the new design markets such as Moderummel, the Trendmafia-Markt and Neukölln Stoffmarkt or Handmade Supermarket.

Hotspots of the Berlin Fashion Scene

Berlin’s now famous fashion designer Michael Michalsky has his gallery/showroom on Potsdamer Platz. Just around the corner is the Catwalk Bar, the first and only fashion bar in Berlin, where even the waiters wear Michalsky’s designs.

The majority of the more established fashion designers have settled in the Spandau Gate neighbourhood in Berlin-Mitte between Hackescher Markt and Rosenthaler Platz. One fashhion store after another lines the pavements in Alte Schönhauserstraße and the Hackesche Höfe. The shoe label Trippen also has a showroom in Europe’s largest assemblage of courtyards. The Berlin wood and leather shoe manufacturer has been attracting international clients since the 1990s and is one of the founders of the Berlin design explosion.

Mulackstraße in Mitte is another hotspot for fashion lovers. Berlin designers such as Starstyling and Firma Berlin go over the top in their boutiques here offering truly idiosyncratic outfits. Firma Berlin creates fashions for men and women inspired by the Bauhaus movement that are functional, but still refined. A couple of doors down, you can go to Lala Berlin, maker of printed scarves that are favourites of actresses like Mischa Barton and Jessica Alba.

Younger labels are also making their home in Mitte near Rosenthaler Platz between Brunnenstraße and Torstraße. Soto was born from the needs of three young men, who were unable to find men’s clothing in Berlin that they wanted to wear. What they now offer can be described as a mix of American sportswear and Scandinavian casual.

The Happy Shop, a 6 metre high wooden pavilion on Torstraße in Berlin-Mitte, is a fashion concept store. Owner and designer Mischa Alexandra Woeste sells her Smeilinener label from this shop. Brands such as Kitsuné, Minä Perhonen, Christopher Kane, Toga and Archive round out the offerings. The architectural and interior design were created by Fingerle&Woeste. 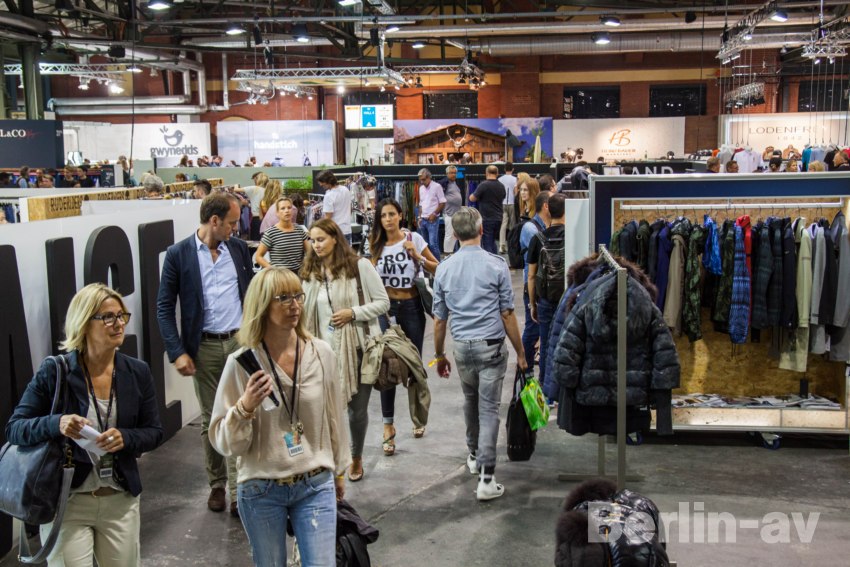 Many young designers have set up their own shops and studios in Kastanienallee and Oderberger Strasse in Prenzlauer Berg. The next big thing is also the district of Friedrichshain around Wühlischstraße and Kopernikusstraße and the new „in“ neighbourhood in northern Neukölln for young fashion designers, especially in Reuter Kietz and on Bürknerstraße.

Nemona is an EU-funded pilot project to promote fashion design and production in Berlin Neukölln and is aimed at young fashion designers and dressmakers. The goal is to set up partnership networks between these two groups to develop new jobs and business models.

The Voo Store, an ambitious concept store for fashion and design, recently opened in a rear courtyard on Oranienstraße in Kreuzberg, near the owners‘ bar Luzia Voo sells many Scandinavian labels in its 300 m2 shop, but also vintage pieces from Paris, selected stationery, cosmetics and selected toys. A store café and event space add to a leisurely shopping experience.

For businesses on a large scale, however, the Osthafen is a unique fashion centre. Brands such as Hugo Boss, Esprit, Escada and Tom Tailor have set up shops to showcase their latest collections to retailers.

Andreas Murkudis moved from Mitte to Potsdamer Straße three years ago. In the former Tagesspiegel complex, he runs a mini department store of 1000 m2, where he sells exquisite quality clothing, leather goods, accessories and decorative furnishings. He finds that luxury has a highly sustainable character. In April 2013, he opened another shop in Charlottenburg’s Bikini-Haus, not far from the Waldorf Astoria.

Held twice a year in January and July, Fashion Week, the platform for German and international labels, draws the international fashion industry to Berlin for a week of fashion shows. This is when everything in the German capital revolves around fashion: a half-dozen trade fairs attract visitors from around the world and showrooms spring up everywhere. Fashion shows take place in different places and the Senate organises the Show Room Mile in the inner city, where everyone can experience the work of young designers.

At the summer Fashion Week from 8–13 July, more than 100 events will take place, including the Mercedes-Benz Fashion Week at the Erika-Hess-Eislaufstadion in the „wild“ district of Wedding and the fashion show Premium at the former postal station at Gleisdreieck. Internationally well-known brands such as Chacharel, Fendi, M Missioni and Trippen present their latest collections at the Premium from 8–10 July. The show is unique for its size and the quality of the fashion and lifestyle on display and is one of the most important international platforms for premium collections. The Bright Tradeshow is dedicated to the streetwear, sneakers, fashion and boardsports in Europe. Show & Order, the trade fair for high-fashion, presents about 250 international collections and fashion brands in the Berlin-Mitte Kraftwerk. The New Yorker Trade Show [Capsule], the Panorama Berlin and the Curvy is sexy show for plus-size fashion and many other formats complement the fashion shows on offer during Fashion Week.

A significant emphasis is now being placed on eco-fashion: at smaller and bigger shows and fairs such as the ethical fashion show and the green showroom, young designers are showing the current trends in the field of eco-fashion. This year, Showfloor Berlin and The Gallery Berlin will be showing in the state opera house’s workshops. This is a first step in a new concept and a reorganization of an event that has been very successful in recent years with over 10,000 visitors per season.

Major brands such as Joop! and local hero Michael Michalsky are always good for a surprise as they put on their shows in unusual locations such as the Nationalgalerie, churches, aircraft hangars or abandoned industrial buildings. The front row is host to celebrities such as Boris Becker, supermodel Julia Stegner and international stars such as Kim Cattrall, Hilary Swank and Matt Dillon. And fashion critic Suzy Menkes is not to be left off any of the lists. There are also smaller shows such as the Premium with avant-garde fashion or 5 elements for lingerie.

This year’s Showroom Days, under the motto is „…are you tough elastic?“, will feature more than 150 designers and artists. Fashion collections, retrospectives, photo exhibitions and multidisciplinary projects will be offered as largely public events.

In addition to the major trade shows for trade visitors and invited guests, numerous exciting events involving the theme of fashion will be taking place throughout the city. There’s something for every fashion enthusiast including handmade young fashion on Brunnenstraße, pop-up stores and the Wedding Dress fashion event. For example, the Berlin start-up label Superficial is presenting its spring/summer 2015 collection from 8–13 July. This ready-to-order collection will be featured at Pop Up by Projektgalerie at Butterflysoulfire Boutique in Mulackstrasse 11, Berlin-Mitte. And after the shows, designers, models and fashionistas head out to the many after-show parties. 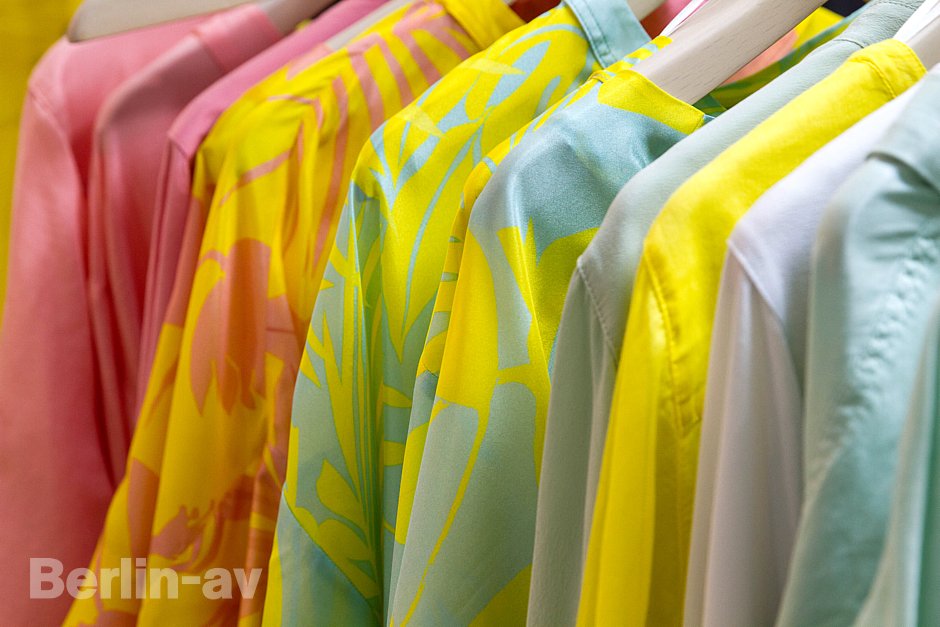 Accessories Made in Berlin

As a „City of Design“ Berlin also offers handmade accessories. Fiona Bennett and Rike Feurstein are known around the world for their successful hat and headdress designs made in their Berlin studios. Anke Runge offers traditionally crafted designer handbags from Penthesileia in her shop between Hackesche Höfe and Friedrichstraße in Berlin’s Mitte district.